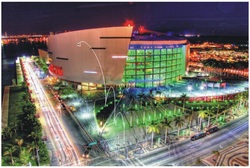 Follow the Bouncing B-Ball at Triple A
A huge chrome basket ball bursts out of the American Airlines Arena, home of the World Champion Miami Heat. Lights repeatedly chase the bouncing ball, following its arcs until it hangs suspended forever over the sidewalk fronting Biscayne Boulevard. There it beckons and taunts everyone to try to jump and touch its surface, just tantalizing out of reach. But for those hearty (and clever*) few who are up to the challenge, anything becomes possible.

*Aside from a photo-opt for everybody, who's gonna stop a father from lifting his son or daughter high enough to touch the ever elusive B-ball?