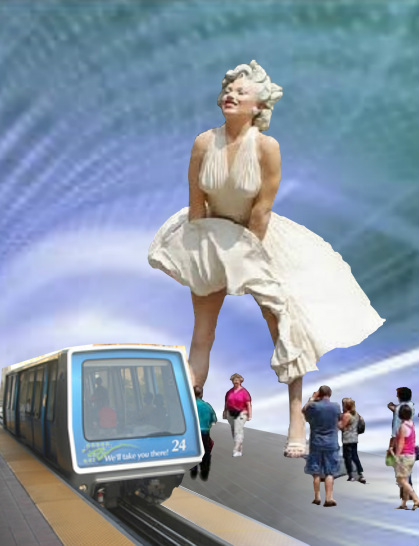 Brickell CitiCentre is a proposed two billion dollar reimagining of urban living in downtown Miami. It is the biggest private works project in America (see TV news interview below). The first phase is expected to be completed in 2015. Part of it incorporates the existing elevated MetroMover which connects Miami's downtown core with the county's elevated MetroRail. Our proposal is to have our lovely lady greeting commuters from the top of the existing station's roof. Permanently. 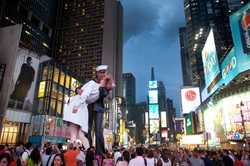 "Unconditonal Surrender" in Times Square
A little about "Forever Marilyn." She's very peripatetic for being 25-feet tall and weighing 36,500 pounds. Built to withstand 150 mph winds, she's been to Chicago and is now visiting Palm Springs, CA. Owned by The Sculpture Foundation in Santa Moncia, CA, word on the street has it she's contemplating traveling to Barcelona, Shanghai, and Berlin. Let's make an effort to get her to vacation here first. The monumental work by J. Seward Johnson is part of his "Icons Revisited" series which includes the ever popular "Unconditional Surrender" which is also on tour. These giant sculptures are made of stainless steel, aluminum, and bronze and, in the ancient Greek tradition, painted. The time-lapse video below shows the laborious assembly.